Since January I have spent hours helping a neighbor whose attempts to pay his creditor, GE Money (doing business as CareCredit), were all being headed off. Whether he used the website or the telephone, he was unable to complete the transaction, and was in danger of expensive penalties. Reaching a customer service rep required unusual persistence, and once he did so, the employees were consistently unhelpful, besides being alternately hostile and contemptuous.

After research, I formed the following hypothesis:

GE Money Bank formed CareCredit, and tricked it out to look like a nonprofit, in order to mislead elderly, inexperienced, or otherwise vulnerable customers into signing up for a credit card that is easy to acquire but difficult to make timely payments on. This results in crippling penalties and interest on what is touted as an “interest-free” credit option. Instead of helping customers pay their health-care bills, CareCredit is more likely to punish customers with extra expenses.

As the president and congressional leaders meet today on financial regulation, I offer this story as evidence of which direction we need to be going now. It is not in our national interest to allow banks to take customers for everything they can get, while “denying any wrongdoing.” We need an independent financial consumer protection agency with the power to intervene in the interest of consumers. END_OF_DOCUMENT_TOKEN_TO_BE_REPLACED

Remember Y2K? That was the prediction, in the late 1990s, that aging computer programs would be unable to function after Dec. 31, 1999, and social chaos would result when these systems failed. The current anxiety about health care reform — or “government takeover” as the Republicans insist on calling it — has a good deal in common with that earlier panic.

Y2K, short for “Year 2000,” was a code name for concerns about the fact that programmers traditionally used only two bytes to represent the year in a date, e.g. 85 for the year 1985. Programmers in the ’60s and ’70s hadn’t expected that their programs would still be in use three and four decades later, when 1999 rolled over to 2000. Most of these “legacy” programs had been cooked up as needed, with little thought for the long term. But as long as the programs continued to work, it was cost-effective for large organizations to keep using them.

By the late ’90s it was feared that the year 2000, or 00, would be the moment at which they all, or a critical mass of them, stopped working forever. Climate control systems would fail, making most city buildings uninhabitable. Avionics would stop working, and transportation would come to a screeching halt. Electricity would stop flowing, phone lines would go dead. People’s life savings would become permanently inaccessible as the financial record-keeping system crashed. Anything could happen. END_OF_DOCUMENT_TOKEN_TO_BE_REPLACED 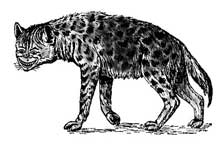 N.B. The hyena caricature (right) is from William Belcher’s Address to Humanity, published in 1796. Thanks to Ragged Edge Magazine.

On Monday, the day after passage of the new health reform law, I received a visit from a friend (call him Vic) who’s perpetually broke. He and his wife (Tina) lived with us at one point when their only other alternative was the street. Now they pay $39 a day to stay at a seedy hotel near the Interstate.

They were supposed to have moved on by now, to have a place of their own. Months ago, a man set aside $1,000 for Vic and Tina to pay a deposit and first month’s rent on an apartment or rental. But Vic and Tina haven’t found a place they can afford, at least not one that Tina is willing to move in to. Vic won’t even look in Birmingham, where rents are lower, because they want to be in a good school district. Their 11-year-old daughter lives with Tina’s parents, and they want her back.

It hasn’t occurred to them to get a cheap apartment for the short term in order to save money. Saving is not a realistic prospect to them. In their entire adult life — Vic is 48 — they have only experienced two conditions: not having enough, and having just enough. END_OF_DOCUMENT_TOKEN_TO_BE_REPLACED

drug  n. any of various substances believed to have miraculous effects on human health and/or behavior. drug culture  n. a capitalist subculture centering on the lucrative sale of powerful drugs. A drug culture includes producers, merchandisers, consumers, and governmental authorities in various roles.Note: In the United States the drug culture is divided into two main […]

NASCAR and Congress: I’ve seen yet another approving mention of the idea of dressing politicians in NASCAR-style uniforms bearing the logos of their corporate sponsors. So when is someone going to Photoshop these outfits for us, using data from, say, opensecrets.org? I’d do it myself if I had the time and skills. Health care: Liberals […]

Coverage of tonight’s Obama press conference, as with the health care reform issue in general, has been tediously focused on political tactics and horse trading. Media consumers are being schooled to feel that reform is a prospect to be feared, as it’s bound to be expensive and is likely to make things worse.

They allow that the U.S. health care system is flawed, but the scale and focus of that critique is almost solely on cost — especially costs to businesses — and the consequences for our “competitiveness.” Because this, you see, is how grown-ups talk about public affairs: in terms of profit, loss, growth prospects, and the global marketplace.

Mark Halperin’s post at the Time magazine blog The Page is a study in this kind of trivia and misdirection. It’s a list of “ways that Obama can make news at his Wednesday press conference” — because mature adults should know that the only thing that matters in politics is how an event feeds the news cycle and sets up the next event. END_OF_DOCUMENT_TOKEN_TO_BE_REPLACED