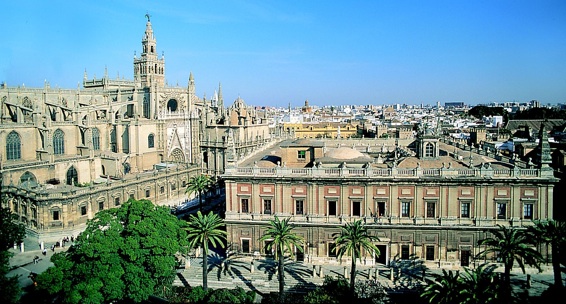 The building on the right is the Casa Lonja, in Seville, Spain: it’s the home of the Archivo General de Indias, or AGI for short. One of the world’s greatest resources for studying the history of the New World, it contains an inconceivable number of documents about the Americas.

Thanks to the wonder that is microfilm, I’ve been nibbling at the edges of the series most popular with U.S. historians, namely the Cuba Papers (Papeles procedentes de la Isla de Cuba) — more than a million documents, many of them about Florida and the Gulf Coast. Copies of some of these documents are scattered around the Southeast, the result of a half dozen or so expeditions to La Lonja by American archivists. The largest collection in the U.S. is probably the one at the P.K. Yonge Library at the University of Florida, but getting access is not a simple matter for non-Gators. My little cache is from the Auburn University library, and is supposedly an exact copy of the stash at the Mississippi Department of Archives and History in Jackson.

Getting a long look at the P.K. Yonge collection would be a treat, and I hope to arrange it. But if I had no end of time and money, I’d rather go straight to the source. A couple of months at the Casa Lonja: aquél sería ideal.