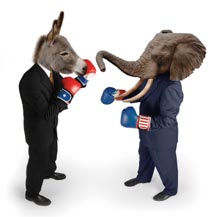 For Lincoln’s 200th birthday I stopped in at Civil War Memory and was distracted by Kevin L’s musings on the supposed transformation of the Republican Party — from the party of liberty and equality to the party of big business, wage slavery, and Indian wars. What happened?

The change was more apparent than real. Since reading William E. Gienapp’s Origins of the Republican Party, 1852-1856 a couple of years ago, I’ve cobbled together a working definition of the core principle within each of the two major parties. It doesn’t flatter either of them.

I wouldn’t mind being convinced that this is a simplistic and cynical parody of two noble political institutions. So go ahead, convince me.

One thought on “The two parties”