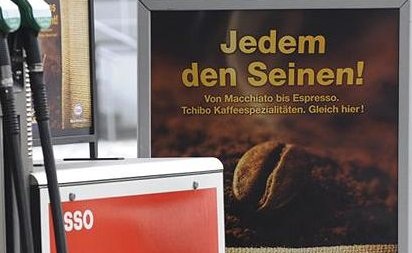 An oil company is in trouble for touting coffee drinks with a slogan that once adorned the gates of a concentration camp (according to the Telegraph).

“Jedem den Seinen!” shouted the Esso ads; it translates roughly as “To each their own!” Change the phrase’s plural number to singular, and you have the words on the gate of Buchenwald concentration camp: Jedem das Seine. In that context, the sense of the phrase was more like, “Each shall get what he deserves.” Like the notorious Arbeit macht frei, it is a cynically vague, but historically and emotionally resonant phrase that could be read in more than one way.

Have you noticed? Both ad men and Nazis have a knack for cooking up language that evades the cortex and speaks directly to the reptile brain. It’s no wonder that the former sometimes end up reminding people of the latter, even without intending to.

In a seminar on the history of fascism, our professor described the Nazi coinage Gleichschaltung, a word that signified the streamlining and merging of organizational structures to align them with ultra-modern, ostensibly scientific, National Socialist goals. (We prefer not to remember how many intellectuals and celebrities in the English-speaking world — Charles Lindbergh, for instance — admired the anti-democratic spirit of Gleichschaltung.)

The word Gleichschaltung combines gleich (“same, equal”) with Schaltung (“switching,” a word that had high-tech electronic associations at the time). One German-English dictionary of the 1930s translated it as “streamlining,” and postwar translators have tried “forcible coordination” and “consolidation of institutional powers.”

So our seminar leader challenged us to come up with an English translation of Gleichschaltung. I thought I had one. Synergy.

I should explain: Because Gleichschaltung was a Nazi coinage, for propaganda purposes, the feeling and emotional effect of the word are more important than its semantic freight. Part of the word’s devilish cleverness is its appropriation of “equality” (through the word gleich) to serve a concept that sought to crush individualism. It also appropriated (through Schaltung) the mystical aura of technology and the assumption that “progress” is unstoppable.

Do we have a word like this in English? I think we do. It’s “synergy.”

Synergy takes a classical prefix (syn-) that suggests unity and sounds like “sin,” a mischievous word beloved by advertisers. The rest of the word sounds like energy, a word with so many positive associations that our despised oil companies keep referring to themselves these days as “energy companies.” Maybe this is why synergy glows like an HDTV.

To be fair, synergy is not a brand-new word, but has popped up rarely over the last three centuries as a Greek-derived word for “cooperation.” (The related synergism has a different, technical meaning to epidemiologists and other specialists.)

But the word’s emergence as a superstar buzzword (since the ’80s) has nothing to do with its history. As used in the biz world, synergy has more feeling than meaning. And it never means plain old “cooperation” or “working together.”

In the context of (for example) corporate mergers, synergy suggests something a lot like the Nazis’ Gleichschaltung: Getting everyone to hew to the same party line, to seek the same goals, while submerging the good of individuals for the sake of the corporate entity. I mistrust the word.