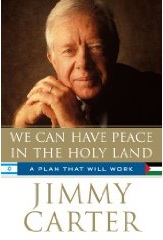 Running an errand yesterday at Brookwood Mall, I take a short cut through Books-A-Million and am brought up short by a notice of a book signing. Jimmy Carter will be in the store this Friday at 7 p.m., signing yet another book about Israel and Palestine. This one’s called We Can Have Peace in the Holy Land. And the subtitle? A Plan That Will Work.

In the introduction Carter retreats from the word “apartheid” which appeared in the title of his 2006 book (Palestine Peace Not Apartheid), provoking a firestorm of indignation from American critics. This was despite the fact that a number of noted Israeli commentators had made the comparison themselves, without being denounced as anti-Semites or imbeciles, as Carter was. Apparently it is OK to make this historical comparison between Israel and apartheid South Africa, as long as it is not done within the notice of U.S. decision makers.

So Carter tries again. This book usefully surveys the turning points in decades of wars, exploits, and mostly fruitless peace talks. That alone makes it worth the price. As in Palestine Peace Not Apartheid, Carter also includes some key documents in the back of the book. To me, the most remarkable of these is the official Israeli response to the “Road Map” proposal. It has to be seen to be believed.

The second-to-last chapter discusses the view of a growing number of Palestinians that there will never be a viable Palestinian state, and that what must be sought instead is full citizenship for Israel’s Arab subjects. This is my own view. But it presents a quandary to Israelis, who are attached to their country both as a democratic republic and as the Jewish homeland. They lack the imagination to see how, if the Arabs are included, it can continue to be both.

What’s clear to everyone who cares — even those who outwardly insist on preserving the status quo — is that things cannot continue as they are. Israel must either grant the Palestinians their humanity, and with it their human rights, or it must try to exterminate them. The tendency toward the latter course is already too strong. Does the vow “Never Again” apply only to the mass murder of Jews, but not of their fellow Semites?

Carter doesn’t talk about these things, perhaps because he knows that frank talk has to wait for the establishment of trust. But how do you establish trust with the heirs of the Shoah? It’s a fact that we still have active Jew haters on the fringe of Western political life, the same fringe that once accommodated the Hitler movement. No wonder that American Jews feel a need for a safe place to escape to, in case the worst should happen.

The forbidden, although valid comparison of Israel with apartheid South Africa actually gives me irrational hope for the future. It wasn’t so long ago that people found it almost impossible to see a peaceful way out of South Africa’s apartheid trap. Things are far from perfect there, to say the least. But compared to what everyone had a right to expect, South Africa has achieved the impossible. There must be a way for Israel, too, even though we can’t see it.